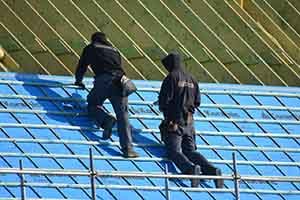 Citing lack of fall protection systems, the U.S. Department of Labor’s Occupational Safety and Health Administration issued citations to Florida-based construction company, Chris Sawdo Construction LLC, for four violations, including two “willful”, one “repeated”, and one “serious”, according to OSHA safety classifications. These citations came as a result of two separate OSHA inspections, at Chris Sawdo facilities in St. Augustine and St. Johns, respectively. OSHA has attached a $199,107 proposed penalty to these violations.

The OSHA inspections were conducted in accordance with the Regional Emphasis Program on Falls in Construction, an initiative enacted in October of 2015. OSHA inspectors observed employees at both of the two separate inspections sites installing roofing sheathing without any type of fall protection. Chris Sawdo Construction has been cited by OSHA six times, in the past.

OSHA Jacksonville Area Director, Brian Sturtecky, said, “Chris Sawdo Construction continues to willfully ignore OSHA’s fall protection standards, despite an extensive OSHA history, being suspended as a subcontractor by homebuilders, and being in the residential construction industry for 20 years. The employer must take immediate action to eliminate putting workers at risk of serious injury or death.”

One of OSHA’s focus four target items, falls on the job site can be prevent by using compliant fall protection systems. There is no training that can undo non-compliance, especially when it is willful. However, OSHA-approved training courses are helpful for those safety leaders within their respective companies who are seeking to maintain compliance. It is highly recommended that those employers who are tasked with the safety of their workers make every effort to utilize such a resource, especially if they are in repeated violation of the same standard or regulation.