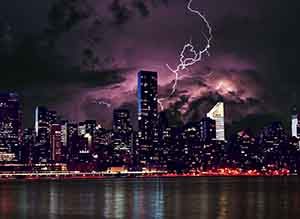 OSHA’s Focus Four Hazards in Construction (http://www.osha.gov) include Fall Hazards, Caught in Between Hazards, Struck by Hazards and Electrical Hazards. If you break down the Electrical Hazards, one that is mentioned is electrocutions. According to OSHA the primary causes are:  Contact with Overhead Power Lines,  Contact with Live Circuits in Panels,  Poorly Maintained Cords and Tools and Lightning Strikes

Lightning Strikes Are More Prevalent Than You Might Think!

Lightning results from the build-up and discharge of electrical energy between positively and negatively charged ions. Rising and descending air within the thunderstorm separates these charged ions. The air near the lightning strike is heated to a temperature hotter than the sun, and the rapid heating and cooling of the air near the lightning channel causes a shock wave those results in thunder. After seeing lightning, count the number of seconds between the flash of lightening and the next clap of thunder. Divide this number by five to determine the distance to the lightning in miles. Also, stay inside for 30 minutes after hearing the last clap of thunder.

Some TRUTHS and MYTHS To Know About Lightning

MYTH: If you crouch low to the ground during a Thunderstorm, this lowers your risk of being hit.

TRUTH: Crouching does nothing to reduce the risk of being hit.. The best thing is to find a substantial building or hard-topped vehicle. If none is available, there’s no safe alternative while you are outside and exposed.

MYTH: If caught outside with a sudden Thunderstorm approaching, lying flat on the ground provides the best change against getting struck.

TRUTH:  Actually it’s maybe the worst thing you can do. By lying on the ground you become very susceptible to ground current if there is a cloud to ground strike nearby. Stay upright, providing a smaller target and move as quickly as possible to a substantial building or vehicle.

TRUTH: It strikes the same place multiple times during a storm, especially if the place is high and there are tall pointed objects. The Empire State Building in New York is hit over 100 times a year!

MYTH:  If it is not raining, there is no danger from a strike.

TRUTH: Lightning often strikes outside of heavy rain, and can strike as far away as 10 miles. This is especially true in the western U.S.

MYTH: Rubber soles of shoes or car tires will protect you from being struck by lightning.

TRUTH: Car tires and rubber sold shoes offer no protection whatsoever. However, the steel frame of a hard topped vehicle will provide increased protection if you do not touch any metal. You can be injured if there is a strike to the car, but you are safer inside the vehicle.

MYTH: People struck by lightning can carry a residual charge and you cannot touch them.

TRUTH: Victims of such a strike carry no charge. Contact your local American Red Cross chapter for information on first aid and CPR classes.

MYTH: “Heat“ lightning happens after very hot summer days, and is not a threat.

TRUTH: “Heat” lightning is a term used to describe a strike that emanates from a thunderstorm that is too far away for thunder to be heard.

MYTH: Contrary to popular belief, it’s just fine to shower in your home while there is a thunderstorm going on.

TRUTH:  The old wives tale is actually true and has been proven. Because water pipes are sometimes metal, they become able to conduct electricity throughout their lengths, which could include a directly connection to pipes in your shower or the drain. It’s best to wait until the storm passes before jumping in the shower! The same applies to being on landline phones OR wireless phones.

Lightning occurs within all thunderstorms, and causes an average of eighty fatalities per year. Most of these fatalities and injuries can occur when people are outside in the summer months, during the afternoon and evening hours.