Honey Bees as a Construction Hazard 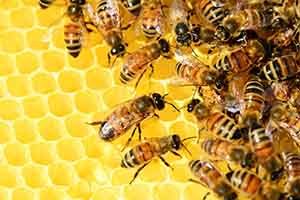 Honey Bees at  your construction site might be more challenging that you think! While OSHA might not specifically address  bees as a hazard in the workplace, they can be an environmental challenge at some construction sites.  OSHA 30 hour courses won’t go over the unusual or bizarre, but the the issue does bear relating for experience-sake.

Several years ago, ten construction workers were stung by honey bees in Glendale, Arizona. Workers were laying a pipeline along a freeway when the incident occurred. Five of the injured received serious bee stings and were transported to the hospital.  Workers disturbed a hive while attempting to complete construction work alongside the freeway.

Last October, two Corpus Christi, Texas construction workers were attacked by a swarm of bees while remodeling a home. Workers were stung when they disturbed a nest of bees inside an electrical box. Each worker received ten to fifteen bee stings.

Spring and summer are active seasons for many bees. Experts suggest bees are not aggressive. Honey bees do not attack unless hives are disturbed. Honey bees only sting once. Stings can be extremely painful and severe when an individual is allergic to insect stings.

Tips for Working Around Honey Bees at the Construction Site

When coming in contact with these bees, construction workers should consider the following tips.

Bees are extremely important to the world, pollinating nearly 80% of all flowering crops, that is 1/3 of all crops humans consume.