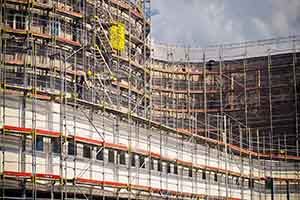 On November 15, 2016, the United States Department of Labor’s Occupational Safety and Health Administration issued citations to Florida-based Flacks Painting and Waterproofing Inc., for numerous violations related to a scaffolding collapse at a Lauderdale-By-The-Sea worksite. The collapse resulted in neck and back injuries to the 48-year-old worker who was utilizing the scaffolding while replacing existing balconies.

The incident took place when the aforementioned employee was working from a balcony. The balcony collapsed and the worker fell eighteen feet to the ground. Following two separate inspections, OSHA determined that (1) willful, (4) serious, (2) other-than-serious safety and health violations existed. The proposed penalty for these violations is, $89,793.

The following violations were determined to have existed in the scaffolding collapse:

OSHA Ft. Lauderdale area director, Ondell Eastmond, said, “This incident was preventable. Had Flacks Painting & Waterproofing provided adequate shoring for the balcony, the worker would not have fallen and suffered serious injuries. Employers must ensure workers are protected at all times and when safety issues are bought to management’s attention, swift and corrective action must be taken.”

Fall-related injuries, including those related to scaffolding collapse,  are among the most common in the construction and roofing industries, as they both feature worksites which often require employees to work at heights. One resource that safety leaders can utilize to ensure fall-protection and safety hazard compliance is an OSHA-approved online training course. Fall hazards, though relatively simple to remedy, can result in serious injury or, in some cases, death.